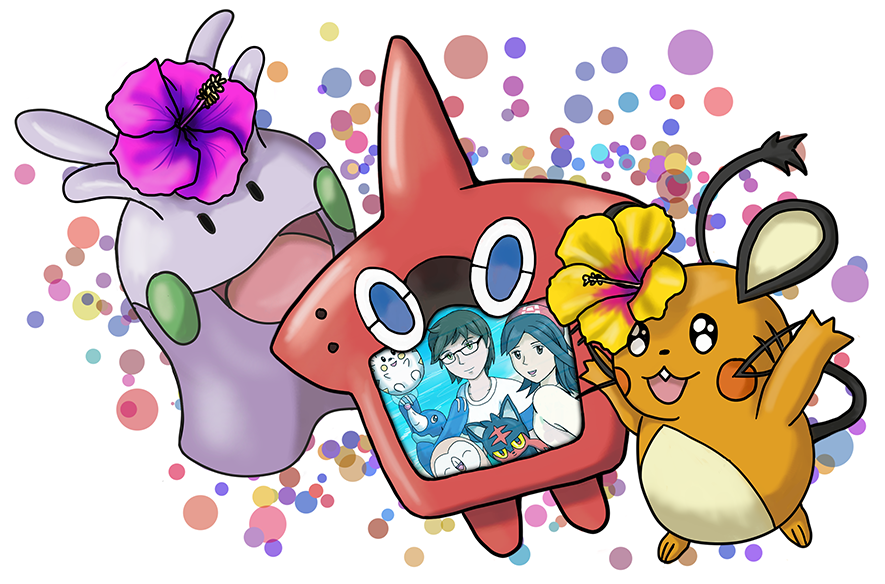 Last weekend, I had to jump on a plane to Hawaii — a 12-hour marathon from Atlanta (Georgia) with a layover in the middle. As it is with every other time I tell people I’m going to Hawaii, most of my colleagues assumed it was going to be some sort of exotic, tropical vacation with sandy beaches, flower leis, and pineapple-flavored somethings. This could not be further from the truth.

Hawaii is where my parents grew up and is currently where most of my extended family still lives. Hawaii is visiting neighborhoods with flowering plumeria trees growing next to the driveways and monkey pod trees towering like umbrellas over the medians. Hawaii is running away from the giant flying cockroaches at night and watching geckos scurry across the ceiling of my uncle’s house. Hawaii is placing red ginger flowers on my grand-relatives’ graves, which rest in the shadow of dormant volcanos. Hawaii is stuffing my face with butterfish bentos, mochi-covered shaved ice, coconut-milk pudding, and ahi poke (long before it became the latest hipster food fad it is now).

Anyway, this quick visit back for family business was a little different because last year, Pokémon Sun and Moon were released and these 7th generation Pokémon games take place in the fictional Alola region, a cluster of four islands that are very obviously based on the Hawaiian Islands. The starting island of Melemele is almost a carbon copy of the island of Oahu, which is where my extended family lives. Thus, when I went back this time, armed with my copy of Pokémon Sun for reference, it was time for comparisons and a retrospective on why the game resonated with me so deeply. 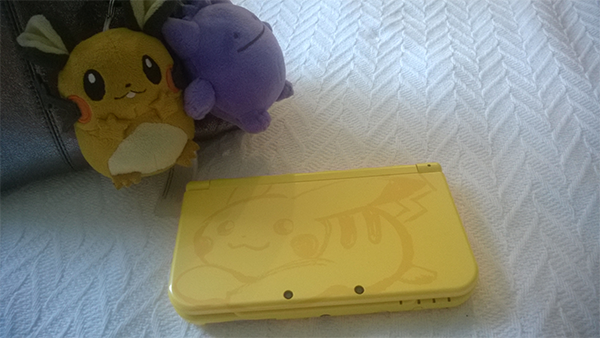 !!! SPOILERS FOR POKÉMON SUN AND MOON FOLLOW. YOU HAVE BEEN WARNED. !!!

The Merry, Merry Island of Melemele

To start, I’m sure tons of other people have probably picked apart and written about the similarities between Hawaii and Alola. Popular Pokémon wiki Bulbapedia has a long list of location comparisons here, which is more extensive than what I’m describing below. I picked up on these particular features of Melemele Island during my initial playthrough (some of which align with Bulbapedia’s), in part because these were places I’ve frequented during family visits:

Much Ado About Malasadas

Every generation of Pokémon games has had some sort of healing item based on a local specialty. This item usually heals all status ailments and is cheaper than the generic Full Heal, but can only be bought in annoyingly limited quantities (e.g., one per day). To date, we have had the following: Rage Candy Bars from Johto’s Mahogany Town, Lava Cookies from Hoenn’s Lavaridge Town, Old Gateau from Sinnoh’s Old Chateau, Casteliacones from Unova’s Castelia City, and Lumiose Galettes/Shalour Sables from Kalos’ Lumiose/Shalour Cities.

In Alola, this healing item is a BIG MALASADA. A malasada is a donut sans hole and in Hawaii, it’s one of the many Portuguese imports to the islands (along with badass sausage). They’re typically plain (dusted with sugar), but are even better when filled with everything from fruit (e.g., guava and passion fruit) to custard to haupia, the best and most amazing coconut milk pudding/dessert you can put in your mouth. During visits to my grandmother, we’d wake up early to wait in line at places like Leonard’s Bakery and come back with a little cardboard box full of them for breakfast.

I absolutely love the fact that Sun/Moon pays homage to a local specialty like this by making it Alola’s regional healing item. I also appreciate that unlike the Lava Cookies and Old Gateau (which were originally Japanese rice crackers and yokan), these weren’t localized into “donuts” or some English-Americanized equivalent.

My father jokes that in Honolulu, there’s a bakery on every block. Not all of them have malasadas, but the point is that baked goods are practically everywhere in Hawaii. Hawaiian sweet bread. Steamed Chinese rice cakes and fried sesame balls. Fluffy guava and passion fruit-filled cakes. Chi chi dango.3 Butter mochi. And of course, malasadas. This makes it unusually accurate that the one eatery chain in Alola consists of three dedicated malasada shops.

Delicious as malasadas are, I personally find it impossible to eat more than one or two of these without feeling a little sick because they’re really sweet. Look, I really like malasadas, but seriously Hau, did you really need a hot date with the malasada shop every time we hit a new island?

When I heard that 7th generation Pokémon was taking place in what-was-very-obviously-based-on-Hawaii, I was both excited and skeptical. Every Pokémon region is based on a real-life place in the world, but I wasn’t sure how Hawaii and specifically its culture would get appropriated into the Pokémon universe.4

I was pleasantly surprised. Playing through Sun/Moon was punctuated with wonderful moments appreciating the tiny details and shoutouts to Hawaiian culture, both old and new. Some of these were probably deliberate; other things were perhaps inadvertent and personal, prompted by the memories of my own experiences with my family.

So because I couldn’t resist, here’s some more comparisons between Hawaii and Alola:

Perhaps for most people, Sun/Moon were just a new generation in a tropical setting with a plethora of twists on the old formula. Instead of gyms, we got Island Trials. Instead of HMs, we got Poké Rides, which I’d argue are a strictly superior mechanic compared with having to surrender your 6th slot for a HM-equipped Pokémon. Instead of Mega Evolutions (which weren’t even available until post-game), we got Z-Moves. I’d argue that all of these were mechanical improvements.

But beyond these changes in game mechanics, I consider Sun/Moon to have been particularly effective at capturing the warm quirkiness and goofiness of Hawaii. Recent Pokémon generations have attempted to faithfully convey the atmosphere of their real-life inspirations. 5th generation’s Unova explored the scale of New York with places like Castelia City and the many bridges spanning the routes. 6th generation’s Kalos strove to capture the elegance and beauty of France.

For many people, Hawaii is a tourist destination, an exotic tropical vacation. Alola captures that with places like Hano Beach Resort and the variety of tourists-as-trainers, but it’s not only that. It’s full of bright colors, not to mention a quirkiness and charm that we haven’t seen in other games. Just look at Alolan Dugtrio’s fabulous hair and Alolan Exeggutor’s…well…everything! And Alolan Raichu? It’s a Raichu that changed form because it apparently ATE TOO MANY PANCAKES (remember how I said Hawaii was all about food?).

However, the main reason Sun/Moon resonates so deeply with me is because of its enormous emphasis on friends and family. Take, for example, Professor Kukui’s use of the term “cousin” when speaking to the player character. In Hawaii, everyone older than you who’s at least a family friend is called an “uncle” or an “auntie” (this really confused my classmates in grade school by the way). Additionally, every major character seems to have some connection or conflict revolving around family. From Hau’s comments about living up to his grandfather Hala to the older-brother role Guzma plays to the members of Team Skull to the messed-up relationship between Lillie, Gladion, and Lusamine, the themes of family are omnipresent. Yes, overall narrative of the game is relatively juvenile (as it is with most Pokémon games). However, there’s a sense of warm nostalgia every time I pop back into the game to check on my Pokémon and go for a Charizard/Tauros ride around the islands.

Game Freak could have made Alola into an exotic tropical vacation and left it at that, but they didn’t. It’s a game that sets a very different tone (and possibly direction) for the series, but still remains relatively respectful to the culture it is inspired by. Pokémon has meant a lot of things to me over the years, but every other time, I’ve been enthralled at the prospect of exploring a new and unknown region. This time though, it feels like I’m just going on a trip to see family and that’s something that games don’t let me do.

1 Images courtesy of Wikimedia Commons and Bulbapedia, property of NASA and the Pokemon Company respectively.

3 A Hawaiian mochi that is made with coconut milk instead of water, making it richer and softer than its original Japanese counterpart. It’s flavorful enough to eat on its own without some kind of filling (e.g., red bean paste). You can also find versions flavored with fruit. I have a recipe for this (with tons of flavor variations I’ve iterated on over the years) if anyone is interested — DM me on Twitter or something.

4 This is given how much JRPG developers seem to love to cribbing random, cool-sounding elements from non-Japanese cultures and mythologies into their own games without any regard for context. Pokémon is actually surprisingly respectful on the sliding scale of reasonable to nonsensical.