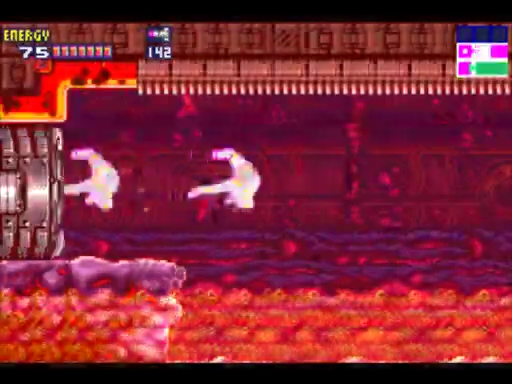 Recently, in the name of “research”, I dug up Metroid Fusion and arm-cannoned my way through it again to see what was so polarizing about it (because I remember thinking the first time I played it that it wasn’t so terrible, especially given that I hadn’t played Super Metroid yet).

This is about the “not-quite-best pair of rooms in the game”1 and some really brilliant level design.

Midway through Fusion, you (the player/Samus) return to Sector 3 (PYR) with the ability to endure heated rooms. On your way out, you can stop by a lava tunnel for some upgrades. You enter the lava tunnel from the right and take a long, slow climb across a ceiling ladder to reach the door on the left. When you enter the adjacent room, there’s a missile tank waiting as a reward for your troubles.

Explore this room a little more to find a hidden ramp leading down to a seemingly-empty hallway. The hallway is long, empty (once you shoot the blocks), and also contains a ramp — this is the perfect setup for a Speed Boost, a technique that allows you to 1) move at high speed until you hit a wall and 2) become invincible during that time to break through certain blocks. Ultimately, this is the setup for a technique called a Shinespark, which grants access to the upper-left corner of the room and another hidden upgrade.

When it comes time to leave the room (because this is a “dead end”), you can shoot the door open and go back into the lava tunnel, backtracking via the ceiling ladder.

This is heartbreakingly, fireball-dodgingly slow.

Instead, you could shoot the door open and Shinespark back through the lava tunnel to avoid the ladder climb entirely.

I cannot articulate how wonderful this feels to discover and execute.

Given that the game never explicitly teaches you the Shinespark (for better or worse) and that it’s the most effective way to get up to the upper part of the room, you feel like a genius when you realize that you can use it to also get back out. You get your choice of how to backtrack — the slow, obvious way and the more difficult, but satifsying way. Discovering that second option makes it feel amazing when you actually accomplish it.

Most of this may seem obvious to anyone who’s played a Metroid game, but moments like this really highlight the essence of what makes navigation in these games click. But it’s not just lack of handholding or the choice of navigation - it’s also the smart level design that facilitates it.

Why is this important? Well, let’s say you’re an indie developer who wants to make a Metroidvania. Or let’s say you want to procedurally generate Metroidvania-style levels. How do you approach level design? Perhaps you’ve remembered to sculpt a high-level progression of rooms that test different player mechanics in a structured, ordered way (i.e. Kaizen-style). And perhaps you’ve also been diligent about carefully crafting each individual room to accomodate for backtracking over a variety of upgrade combinations.

But it’s incredibly hard to think about the relationships between rooms and how they can work together. For a single room, every entrance is almost always an exit (due to backtracking) and thus every room has the potential to set up how the player navigates through the adjacent rooms around it2. This involves designing around room directionality and connectivity. It’s essential because it makes areas (subsections of the entire world/environment/map) cohesive not only thematically, but mechanically.

This isn’t particularly novel — Metroidvanias have been overanalyzed and deconstructed by any and everyone who has attempted to emulate or study games like Super Metroid and Castlevania: Symphony of the Night. Still, I believe that it’s worth pointing out small, subtle moments like these two rooms in Sector 3.

1 I happen to find the SA-X rooms fascinating (to quote Adam). The Power Bomb room where you can accidentally drop right in front of the SA-X on its way out is a favorite, although I am sure many would disagree.

2 This is particularly true when you consider that room transitions may not always be solid doors/walls/etc. that must be interacted with, but can passed through immediately with few or no transitions/loading. In the case of Metroid Fusion, a player can rarely bypass more than a single adjacent room at one (e.g. via a Shinespark).